SDLC Models and its Phases

HomeArticlesSDLC Models and its Phases

Models and the Phases of SDLC

Software plays a significant role in ensuring the smooth functioning of an organisation. This is the reason, it is very important for every company to have a properly developed and synchronised software system. This article explains the various Software Development Life Cycle models. The aim of this explanation is to introduce the reader with the advantages and disadvantages of each model. Further, the choice of the model depends on the needs of the user and in which way he wants to pursue the SDLC.

Waterfall model, also known as linear-sequential life cycle model is the first model to be ever produced for software development purposes. It is one of the most popular SDLC approaches till date due to its waterfall design which allows to illustrate the development process in a linear and sequential manner.

The phases in the waterfall model are as below:

Although the phases are distinctively classified and in a much orderly manner, there are substantially greater risks and several uncertainties in the development process of the waterfall model. Following are the points which detail the disadvantages of this model.

Iterative model starts implementing the basic functionalities of the software and performs certain essential enhancements iteratively. It continues to evolve until the final software is developed. At every iteration, an operational product is delivered and based on which several modifications and alterations are made to the product. This further leads to the addition of new features in the next iteration. Basically, a product is generated at every iteration and it evolves in the next transition, rather than a completely new phase.

The technical demands of IT assignments often put you under great stress. These not only ask for your high concentration but also require you to put

A spiral model is kind of a hybrid model which is a collaboration of waterfall model and iterative model. Even though the Spiral Model is a combination of both the models, a great emphasis has been laid on the risk analysis. It is due to the fact that risk analysis is one of the significant factors for successful completion of the software.

The iterations from the iterative model have been carried forward to this model. It is because the product is released in each iteration of spiral. However, only controllers’ aspects have been inherited from the waterfall model. Spiral model comprises of four phases:

The Big Band model is one of the most basic models which is implemented by the newcomers and the students as it is fairly easy to implement. This is because no prior planning for the project life cycle needs to be done which can however lead to certain risks.

For this, one can just start production of the project with capital and human resources. There is a much greater probability that the final product might not be in accordance to the requirements specified by the. This can drop the reputation of the organization among the clients. However, the requirements can easily be added into the project once it gets started and even while it is near completion and that too without much of analysis.

This model is best suited for relatively smaller projects which are not supposed to be used by larger organizations or for significant purposes. It is primarily used for academic purposes where timeline and budget are not specified and are solely being developed for practice purposes.

With almost no planning and not much experienced team members, there are much greater risks involved in this model. Along with this there is a lot of uncertainty with the completion of the project. In addition to this, there are many other disadvantages, few of which are listed below:

This model is extensively used in software engineering because of its close association with real world entities and collaboration of iterative and incremental models. The major emphasis of this model is on customer satisfaction and how to adapt accordingly to deliver utmost customer experience. These parameters can be achieved by implementing smaller yet incremental builds in the form of iterations, which last from one to three weeks.

The final product attained at each iteration is then showcased to the clients and other essential stakeholders, in order to ensure the satisfactory achievement of all the requirements. In case, there are any other requirements to be added, they can be forwarded to the next iteration. This can be done by adding new functionalities in the next iteration. One major reason behind the success of agile methodology is the tailored experience. This helps in treating every model distinctively in order to obtain the best out of it. Thus, the agile approach uses a distinct set of operations and tasks for every project. This is to complete the project appropriately and within the specified time and budget.

RAD is the acronym used for Rapid Application Development which is a software developing methodology based on iterative and prototyping. This model does not require any peculiar and extensive planning before starting out due to its use for short duration projects. It focuses on garnering requirements from the customer so that prototypes can be developed and used in repetitive iterations for an effective delivery of the project. The teams which are used for this methodology are highly skilled yet small. Additionally, they ensure that the prototypes which are developed for the project can be reused. The RAD model undergoes several phases as below: 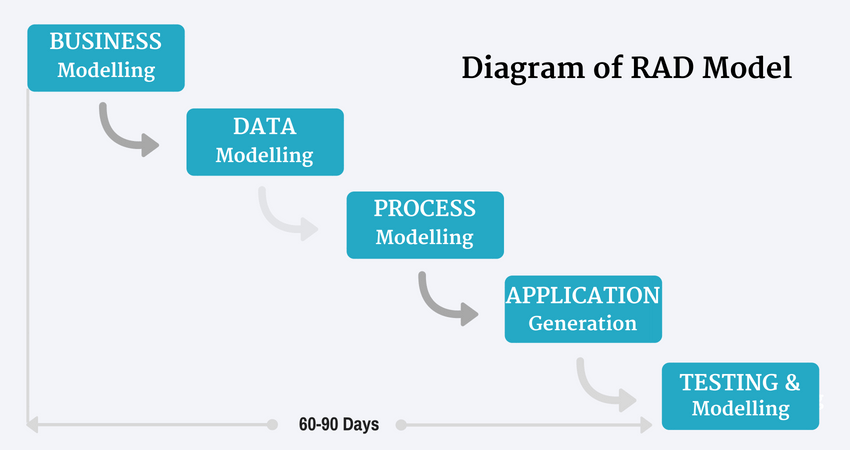 The model is a rapid development model. It promotes customer feedback which helps to develop a better final product. In addition to this, there are many other advantages of Agile model as listed below:

There are numerous SDLC models available, but each vary in terms of its usage and processes. Also, the selection of the model largely depends on the purpose of the organisation. Additionally, the time, cost and level of the project are imperative factors to consider before finalising the type of SDLC model. Moreover, the user should have a through knowledge about the advantages and disadvantages of each model, to be able to select the best of all.

Having earned a degree in IT Security Management from the Northwestern University, Charles Brian is a techno- geek. Along with working for the top management firm, he loves to share his expertise with the students by offering online management assignme

Add a link to this page on your website:
<a href="https://assignmenthelp4me.com/article-advantages-and-disadvantages-of-different-sdcl-models-632.html" > SDLC Models and its Phases </a>

What is SDLC models?

These are the process-based models, which define the working system of the software industry in the development of the software. It includes the designing, development and testing of high-quality software which is why it is also called as the Software Development Process.

What are the 7 phases of SDLC?

Which is the best SDLC model?

The Agile model is known to be the best SDLC model. It consists of a combination of incremental and iterative approach. It also focuses on suiting the requirements well with the option of flexibility.