DBMS- its types and Applications

What is the difference between centralized and distributed DBMS?

Database is a collection of data which allows a user to easily create, read, update, or delete a record. Database in its relational guise is homogeneous and utilizes traditional tabular format. There are several concepts of database namely MySQL, SQL Server, Oracle, and others. These have become extremely popular across the globe defying the geographical barriers. A database management system is used to manage the modern databases as it provides ease of usage to the database administrators.

DBMS is the acronym used for database management system which is basically a software package. It provides easy access to certain functionalities such as creating, manipulating, retrieving, and managing the data stored into the database. It eliminates the processes which a database administrator must perform for the maintenance purposes of a database. Several popular database management systems are FoxPro, dBASE, MySQL, Oracle, and SQL Server.

Database in its basic terminology is the collection of data which is managed by a database management system. A DBMS can be described as a powerful software or a tool which eases out a lot of work for a database administrator. In this all the data can be easily manipulated and managed. Thus, enhancing the performance of the system by a generous margin. This is the reason why DBMS gets implemented in several heavy domains such as airlines, banking, education, retail etc.

The universities across the world give you a number of assignments. These college assignments demand high concentration and precision. Sometimes, due to a busy schedule, you tend to lose the balance. To help you sustain a positive flow, we at Assignmenthelp4me, are always available for you. You can place your assignment order with us anytime of the day and we would happily serve your request.

Scaling is a significant concept in any system in order to sync with the increasing or decreasing business needs. However, a centralized server only supports vertical scaling as horizontal scaling will contradict with the single central server.

The primary components of a centralized system are:

A central server system supports a client-server architecture as all the client nodes are connected to a single node of server.

Although it can scale vertically, there is a limit. This means after a certain limit, the increase or decrease in hardware capabilities does not affect the server performance. Thus a drop in performance is experienced.

Use Cases of Centralized System

The system is extremely popular because in this type of system, each node makes its own decision rather than being dependent on a single entity for sending or receiving the requests. There are less chances of system failure, as if one node gets fail, then it puts no effect on the others, so other work goes on smoothly. 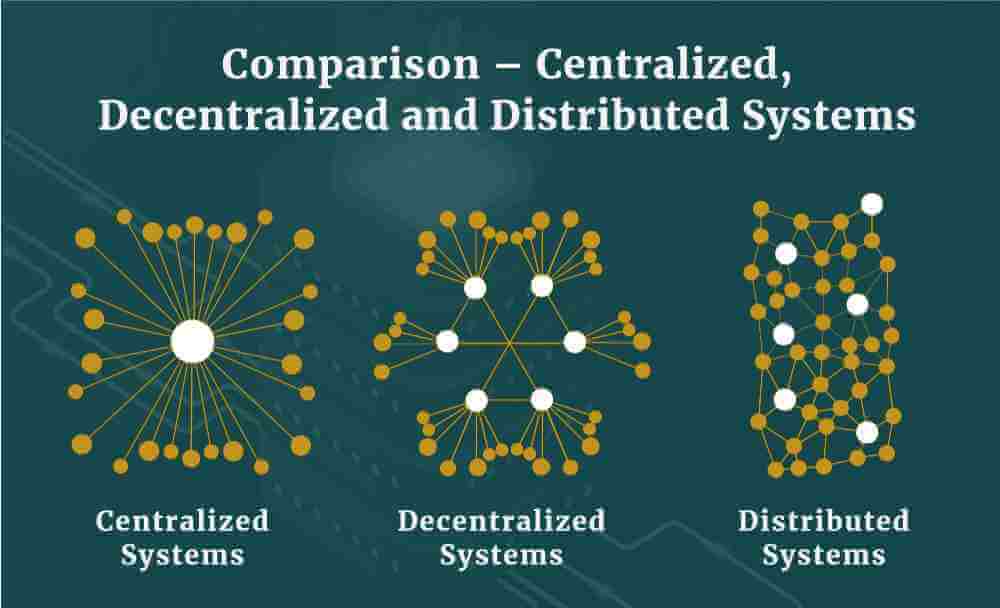 The primary components of a decentralized system are:

Database assignments are many times tough to understand. These not only require high intelligence but long hours to finish the assignment. Thus to to partner you in completing your database assignment, we at Assignmenthelp4me, are 24*7 available for you. You can anytime connect with us and order your college assignment.

Use Cases of Decentralized System

A distributed system is kind of similar to that of a decentralized system, as the nodes are independent of each other and are responsible for their individual behavior and there is no central node which receives and responds to a request either. However, unlike a decentralized system, the result from a distributed system is based on the collective result obtained from every node out of the system.

A distributed system is quite extensive and flexible in nature, thus both vertical and horizontal scaling is possible.

The primary components of a decentralized system are:

Use Cases of Distributed System

Difference between distributed and decentralized

The above article describes the concept of database in detail and describes why a database management system (DBMS) is required. It is observed that a DBMS offers a much better and enhanced software to manipulate and manage the data much more efficiently and effectively by a database administrator than otherwise. It is attained that a DBMS plays a crucial role in maintaining the security of the system along with maintaining consistency of the data. The systems which can be deployed are of three types namely centralized, decentralized and distributed. Each system offers distinct functionality and its own purpose for different sets of industries. A centralized system offers a client server architecture where all nodes are dependent on a single central node for storing and retrieving data. On the other hand, in case of a decentralized system, all the entities are independent and produce their own decision, thus eliminating the risk of a single point of failure. However, a distributed system is widely used in large organizations primarily due to the fact that the accuracy is high, and it has a much higher fault tolerance than others. This is because multiple nodes produce results independently and deliver it collectively to attain a single decision or a result which is highly accurate.

A financial management expert with a relative degree from the University of Melbourne, he is an expert in conceptualising and drafting assignments of management students. Alongside, he invests his valuable time working as a consultant for management firms.

Add a link to this page on your website:
<a href="https://assignmenthelp4me.com/article-what-is-the-difference-between-centralized-and-distributed-dbms-337.html" > Database & Centralised, Decentralised and distributed systems </a>

What is the difference between decentralized and distributed systems?

What is centralized and distributed database?