A thorough study of QANTAS Group

Unachievable is just a word! Everybody says it, but QANTAS has proven it right, with a constant growth in its development chart over the century.

Absolutely, the company has crossed over the 100 years mark and has proudly served the Australian citizens and the people from around the world, with its world class facilities.

QANTAS has made a name for itself in the aviation industry, not only in Australia but in the entire world with its world class flying facilities. Having served the industry for almost 100 years, the company proudly declares itself as one of the most trustworthy organisations in the world of aviation. This blog can be a source of essay help for the students of college or universities, who get such topics as a part of their assignment. Our team at Assignmenthelp4me, ensures to give online assignment help to all the students who find difficulty in completing their college assignments.

An introduction to QANTAS

QANTAS has made a name for itself in the aviation industry, not only in Australia but in the entire world with its world class flying facilities. Having served the industry for almost 100 years, the company proudly declares itself as one of the most trustworthy organisations in the world of aviation.

QANTAS was formed in 1920 in Queensland and in 2020 it celebrates its completion of 100 years of continuous service of safety and precision. It mostly gives the credit of its success to its fellow Australians, who have helped the company achieve greater heights in its rollercoaster ride of success.

QANTAS is recognised as one of the strongest and most dependable long distance airlines of the world. It in fact enjoys a highly reputed name in Australia and employs a huge number of Australians and people across the globe.

The company is known for its superiority in terms of safety, operational dependability, servicing the customers, planning, maintenance and engineering. The prime business of the brand involves the transportation of its customers with the help of its two airline brands- Qantas and Jetstar. These two brands are known to serve class and safety to its regional, domestic and international customers. Further the Qantas group has a broad range of subsidiary businesses that list from Qantas Freight Enterprises to its frequent flyer services.

A brief about Qantas History

Qantas was originally registered as Queensland and Northern Territory Aerial Services Limited. It started its operations on 16th November 1920 in Queensland. Its founding chairman was Fergus McMaster and in his words Qantas was “inspired by the spirit of ANZAC”. The airlines in its very early days prove to be vital for Western Australia to form connections with the world, which is why a lot of enthusiasm was seen in its people, who invested in its shares as well as bought tickets to connect with the outer world.

The vision of QANTAS founder from the very beginning was aligned with the fact of introducing and pioneering an absolutely new fashion of travel for its fellow Australians and people from the world. He did not just want it to take the shape of just another airline. The vision for the company was crystal clear to fly overseas and rule the world.

A detail about QANTAS subsidiaries

Over its 100 years journey, QANTAS has become a brand, which is popular among the people of the world. It has been the reason people smile and the one which helps them earn bread and butter for their families. Not only has the company established its mark in the business of transportation of passengers and air freight, the organisation also deals into a number of subsidiaries, which are listed below.

A glimpse of Qantas organisational structure

The entire Qantas management structure is taken care of by the board of directors, which is also further seen by the Qantas Audit Committee. The board ensures the obedience of the Business integrity program of Qantas. The board has formed a charter and works in accordance to the rules and regulations being framed and documented in a written piece mentioned on the company’s website. The board of the Qantas management structure is headed by a 10-member board committee of which Richard Goyder is the chairman and Alan Joyce is the CEO of Qantas Airlines. 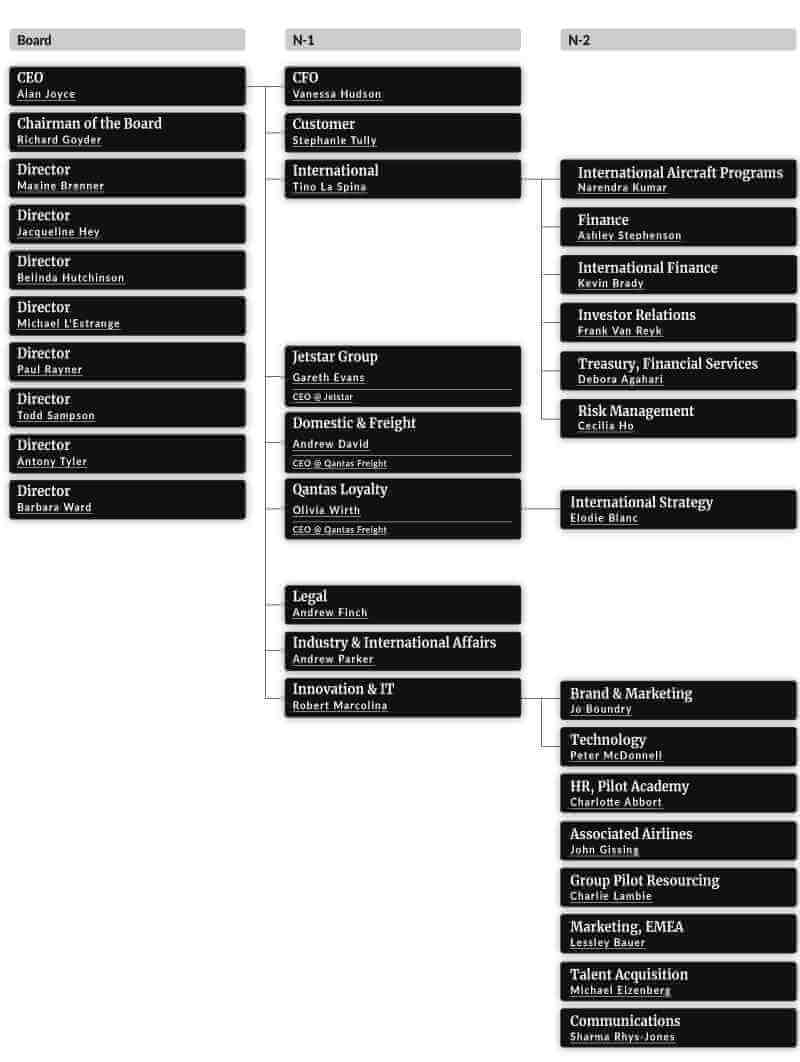 The respective board assures the right management of the Qantas organizational structure and oversees that every single task of operation is properly managed at each level, beginning from the commencement stage. Also, the Qantas board has formed a committee charter for each department, which sees that the flow of information is well maintained and communicated at every phase of its development. Moreover, Qantas flights look forward to maintain a healthy relationship with its internal and external public. Along with providing high class services to its customers at the Aviation sector, the company also sustains transparency of information between its employees.

The board is accountable towards the implementation of all the legal and constitutional policies at each level of the Qantas management structure. It is because of the right formation and execution of the laws at all steps of the organizational structure that Qantas has managed to rise at such heights. The company is also believed to be an imperative contributor to the economic development of Australia. As per the 2017 data, the company provides employment to more than 26,000 people across the globe.

The leadership of QANTAS has been highly recognised and valued in the business world. It is the prime reason that the company has grown so well under the diligent and expertise guidance of such experienced professionals.

The board of directors comprises 10 members, most of which are independent non- executive directors, who work cohesively with the group CEO of Qantas- the Executive Director. All of these hail with strong experience and possess diverse perspectives with respect to their work knowledge. The group has been ensuring profitability to its various shareholders including customers and employees much because of the extensive knowledge and independent work culture it has brought into function.

The board comprises a team of four women and six men.

This is the team which is actually responsible for managing the business and bringing fame and name to the QANTAS group. The continuous involvement of these experienced minds sprinkle the magic of expertise to the commercial and operational sectors of the various airlines and businesses the organisation deals into.

Alan Joyce- A man of perfections, management and empathy

Alan Joyce is an Irish by birth and he has taken educational degrees from the Dublin Institute of Technology and Trinity College, Dublin. He was born in a service class family and is known to be a very down to earth person. His hardships have made him learn the values of honesty, humbleness, openness and truthfulness. He started his career with Aer Lingus and worked there at various positions for 8 long years. Further, in 1996, he joined Ansett Australia and shifted to Australia. In 2000, he got the fortunate opportunity to join QANTAS as the head of network planning and strategic functions. After that there has been no looking back for the man. 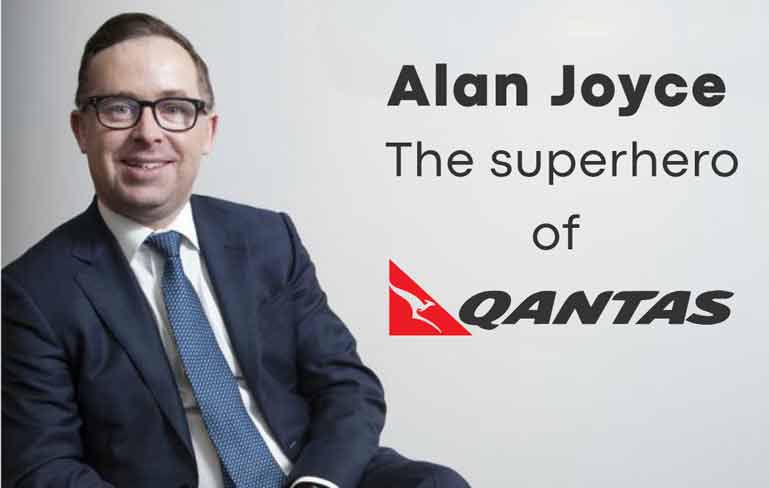 Alan Joyce is presently the CEO and Managing Director of Qantas Group. He has been serving this position since 2008. Throughout his journey as a CEO with Qantas group, he has seen a number of ups and downs. He has witnessed the qchange and has even become the reason of change, which is why his leadership is considered to be highly appreciated and valued in the business world.

The leadership style of Alan Joyce has always been the talk of the town. Ranging from his efforts to provide comfort and empathy to his customers, Joyce has been well accepted by the members of the Qantas group. His guidance is always insightful and his transformations have made significant difference in the world of aviation and customer servicing.

He is the man who has received the award ‘The companion of the order of Australia’, the highest honour for his services to the mankind, aviation sector, gender equality and community. Many publications and corporates around the world have regarded Alan Joyce as the exemplary leader whose vision has turned the fortunes of the QANTAS group. There were times when QANTAS was about to doom, but with the guidance and leadership of Alan Joyce, QANTAS, is today shining as the brightest star in the Australian economy. It is certainly because of the assertive goals of Alan Joyce and his ability to make his members move on his visionary path, that he along with his QANTAS group members have achieved such great heights of success.

The leadership style of Alan Joyce is generally recognised as the transactional or the managerial leadership style. This style allows the leader to stay in direct contact with his employees and keep an eye on their activities. Also, the results of the act are supposed to be either rewarding or punishable, depending on the degree of achievement. This is believed to be a great style to boost the performance of the team members, as it clears out the aim of the team and gives them a descriptive path to work accordingly.

Further this kind of leadership proves to be the ultimate source of motivation for the employees to keep moving ahead towards their goal. Additionally, when the mentor himself is all time ready to guide his team mates, then it is not only encouraging for the team members, but also elightens their path with absolute perfection and confidence.

Thus, it is extremely important for every leader to adopt an attitude which is helpful and motivating as well. It is with the commencement of such a working atmosphere that organisations can learn to produce high profits along with earning the trust and confidence of its employees.

Intellectual growth should commence at birth and cease only at death.

As rightly said by Albert Einstein, learning is a never ending process. One should never stop learning and the same has been absolutely proven by the QANTAS group. The company has risen to heights by continuously transforming its managerial processes and internal structures. It has not only promoted innovation but has also inculcated the spirit of righteousness in all its employees. Its constant expansion programs and new ventures, further motivate the employees to stay connected with the goal of the company and visualise their personal as well as the professional growth with the developmental chart of the group.

What group does Qantas belong to?

Qantas belongs to Oneworld, which is the world's biggest airline company which assures high quality.of service at every step.

What is the purpose of Qantas?

The prime purpose of Qantas is to serve its customers with high quality service and to become the first choice of its each customer in whichever field it serves.

What is Qantas strategy?

The clear cut strategy of Qantas focuses on the overall development of the company. Also, its main aim to deliver highly sustainable benefits to all its shareholders. In addition to this, it prioritizes the safety of its customers and people.