Concept of Monopoly companies in Australia

HomeArticlesConcept of Monopoly companies in Australia

A monopoly could be understood as a scenario when a single company and its respective product range significantly dominate either a particular sector or entire industry. It could be considered as a practical and extreme result of extended free-market capitalism (Casson, 2016). The term monopoly is most commonly used for the definition of the entity that has near-total or total control over the entire market segment. In a monopolistic situation, a single group, entity, or company eventually becomes significantly large that it gains complete or near-complete market, including goods, commodities, supplies, infrastructure, and assets associated with a particular service or product.

The present report will shed light on an important term used in economy of every country i.e. monopoly which means the control of a single firm over the industry or market. To understand it, market of Australia has analyzed and it is observed that two sectors supermarkets and banking in Australia possess monopoly. Woolworths and Coles represented 80 per cent of the market in supermarkets industry whereas in banking sector ANZ, NAB and Commonwealth are the major banks which possess monopoly. The other feature of monopoly presented that most of these companies are in the race to maximize their share and profits. These companies are the market price makers in their respective sector. The major reason of this monopoly is that there is high entry barrier in these sectors and it is hard to achieve economies of scale. The detailed discussion will be provided on various elements that leads to monopoly of these companies in Australian market.

Monopolies tend to have an edge and unfair advantage over different rival organizations mainly because of the fact that they emerge as the sole provider of specific products and services. However, in a monopolistic environment, an organization does not face any significant competition because it is the only producer and seller of the products with no close substitutes. In a monopolistic market space, a wide range of factors such as ownership of resources, government license, patient and copyright, and high starting cost tend to make a singular entity as the single seller of products and goods. Such factors much restrict other potential organizations from gaining entry into the market segment. Monopolistic organizations also possess important information that is not generally known to other organizations, which gives them a significant edge (Liu & Yang, 2007).

The competitive and monopolistic market tends to mark the extreme in terms of different attributes of market structure. There are a number of similarities between the two types of markets, such as – similar cost functions, minimization of costs and maximization of profits, the similarity between shutdown decisions, etc. To better understand the monopolistic market structure of Australia, the most potential distinction could be evaluated in the form of a demand curve. Different monopolistic organizations in Australia have a downward sloping demand curve in contrast to the perfectly elastic curve of a competitive market segment.

Firms in such a market have limited competition and can mark up their respective prices as per their preference. Primary responsibility for managing such aspects is possessed by the Australian Competition and Consumer Commission. However, the firms have grown significantly large in size that it has lower costs per potential customer. Every additional customer would make the overall cost fall cheaper.

In a monopolistic environment, there are a number of potential sources that allow various organizations to generate significant control over the entire market space. As per the monopolistic scenario of Australia, a considerable monopoly exists in the supermarket industry and banking sector. Woolworths, Coles, and Wesfarmers have obtained a significant fraction of the entire Australian supermarket sector. Such firms have grown considerably large in the context of their respective operations and overall network that they control a substantial market space. It has been analyzed that over 80% of the market segment is captured by dominant supermarkets – Woolworths, Coles, and Wesfarmers (Kollmorgen, 2016). The remaining fraction comprises of all other supermarket industry that operates in Australian domain.

The below-given graph provides an illustration of overall competition in different supermarkets around the world. With the help of this graph, four different supermarket brands – Coles, Woolworths, IGA, and Aldi – have over 90 percent of the entire market space. From the below-given graph, it has been analyzed that major supermarkets of Australia have significant control over a considerable fraction of the market segment. This type of analysis is the outcome of our assignment help experts; this article has been articulated keeping in mind the monopoly analysis in Australia, as it is a very controversial topic in Australia due to significant control of few companies in the sector or other. Read further to know more. 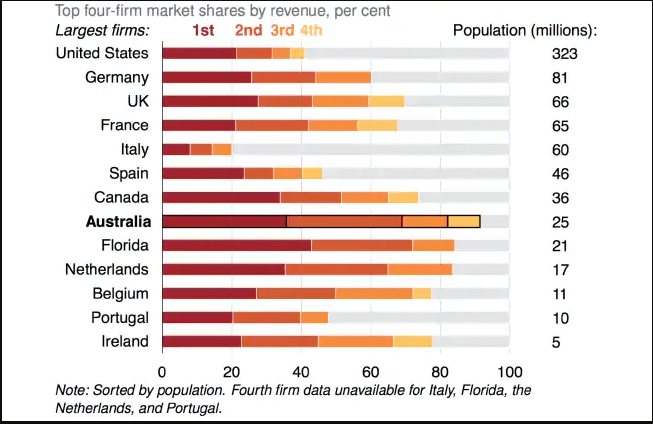 Further, in the banking sector, four significant organizations – NAB, ANZ, Commonwealth, and Westpac – have significant control over the entire banking and finance industry. Such banks exert a monopoly over other organizations primarily due to vastness of operations, high capitalization, a substantial amount of assets, and a secure operating network amongst Australia and other countries. Apart from Australia, some of the banks also have operations in other countries which provides them with an edge over other firms in the industry (ACARROLL, 2012). With the passage of time, these banks have grown humongous in size and engages millions of customers on a potentially massive scale. The below-given graph provides a percentage share of various banks in the banking and financial industry over a period of time. 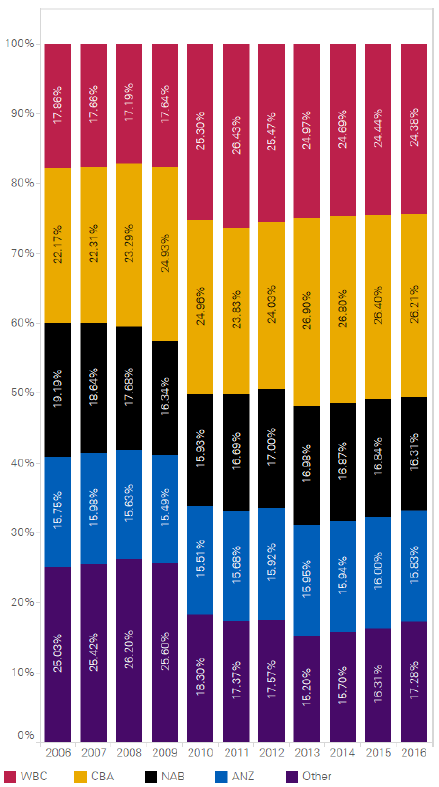 Multiple sources have been identified that allow such organizations to obtain a monopoly over others. It is due to such causes that these organizations have been able to grow humongous in size and capture a significant fraction of their respective industries. Some of the most significant causes of power include –

Characteristics of Monopolies in Australia

There are multiple characteristics that are possessed by different organizations that operate in a monopolistic market structure. Some of the most recognizable attributes of different monopolies in Australia are –

As discussed above, monopolies exist in two different segments, i.e., banking and supermarket sectors. In the supermarket domain, Woolworths, Coles, and Wesfarmers have emerged as significant leaders in the respective domain as they control a considerable fraction of the entire market space.

There have been a number of researches and surveys that have defined that these three firms control over 80% of the market segment. The rest of the fraction combines a large number of other firms that operate in a similar segment, such as IGA, The Distributors, ALDI, etc. The entire market concentration of Australian grocery stores is stuffed amongst three major organizations – Woolworths, Coles, and Wesfarmers. Frequently, all of these organizations are locked in price wars, but due to significantly high market share, none of them deals considerable damage. A detailed description of these organizations has been given below.

In the Australian banking sector, four major organizations – NAB, Westpac, ANZ, and Commonwealth have considerably deep-rooted into the entire sector. With the passage of time, overall competition in the banking domain has been continuously incrementing, but these four firms have gained significant control over the market space. Due to significant coordination amongst these four banks, they generate millions of dollars in terms of mutual funds and assets annually. Each of the firms has a prominent aim of maximizing profits levels as in a monopolistic situation. For setting up an organization in the banking industry, a considerable amount of capital is required that makes it hard for new entrants to gain entry. In the current situation, customers tend to invest only in one of the four banks, which predominantly holds the lion's share in the market space. It could be understood that all four banks have obtained significant control of the entire sector, due to which they have emerged as monopolistic organizations. A concise description of each bank has been given below –

Add a link to this page on your website:
<a href="https://assignmenthelp4me.com/article-monopoly-companies-in-australia-469.html" > Concept of Monopoly companies in Australia </a>

Are there any monopolies in Australia?

Are monopolies illegal in Australia?

There is no particular law governing this issue. However, there are certain laws which prevent the misuse of monopolies. These fall under section 46 of the Trade Practises Act. Though this comes out to be an entirely different issue, the crux withstands the fact that there is no law against monopolies in Australia.

Is Woolworths a monopoly?

Woolworth as a company falls into the duopoly market structure. It is because of Woolworths and Coles being the two key players in the supermarket industry in Australia, that it is taken as monopolistic competition.