A detailed account of TESCO and its leadership analysis

HomeArticlesA detailed account of TESCO and its leadership analysis

Tesco is a British multinational company. It sells groceries and general merchandise to customers. Its headquarters are located in Welwyn Garden City, Hertfordshire, England. It is known to serve millions of customers every week throughout the globe. There is nothing which the customers can’t find in Tesco stores. It is one stop solution for most things the customers intend to buy such as groceries, books, furniture, toys etc. Not only this, Tesco also has its fuel stations, telecom and internet services. Further, it has nearly 7000 stores worldwide and employs 4,50,000 people.

This article curated by our expert academic writers presents an extensive account of TESCO, a renowned British business organization founded in 1919. The article spans the history of TESCO, the leadership style of its top management, and its incumbent organizational structure. A meticulous analysis of the aforementioned verticals of business operations and strategies have been carried out in this post that also takes into account an evaluation of the upcoming leadership changes set to take place in the organization.

Tesco began its journey in 1919. It was founded by Jack Cohen. Initially, Tesco wasn’t the great supermarket as it is now. Instead, it was just a group of market stalls in Hackney, London. In fact, even the name Tesco got christened after Jack Cohen purchased a shipment of tea from T.E Stockwell in 1924. It was formed by combining the first three initials of ‘T.E.S Stockwell’ i.e. ‘TES’ and the first two alphabets of Jack Cohen’s surname i.e. ‘Co’. This way, the company formed its name ‘Tesco’.

Later, in 1929 the first Tesco store was opened in Burnt Oak, North London. It sold dry goods along and Tesco Tea. Then, in 1934 Tesco started to expand. Jack bought some land and built a new warehouse and headquarters at Angel Road, Edmonton, North London. After this, Tesco continued to expand rapidly and soon its stores flooded different areas in London and its neighboring countries. Further, it was in 1958 that the first Tesco supermarket was opened in Maldon, Essex. This was followed by the expansion of Tesco supermarkets in different parts of London and other countries.

Tesco supermarket sells groceries and general merchandise to its customers. It is dedicated to serve the customers with the best products. So, in 2012, it introduced a new product range named – Everyday Value, with a mission to provide high quality and healthier products to the consumers. Even today, Tesco continues to change the customer’s lives for better with its high quality products.

All these things together have made Tesco world’ leading supermarket.

Over the years, Tesco has established itself in different fields other than just selling groceries and general merchandise to its customers. It is through these different subsidiaries that Tesco has further provided employability to thousands of people. Given below is a list of different Tesco Subsidiaries:

Tesco Board of Directors consists of 10 members. It follows a hierarchical structure, which truly matches the demand of the huge size of the company. In this structure, multiple management systems operate to ensure that everything gets done with perfection. In the case of Tesco, there are 4 levels of management operating within a store.

At the top level of the hierarchical structure, a Regional Manager operates and takes care of the rest of the management systems down the line. He is in charge of ensuring the smooth functioning and operation of the entire hierarchical structure. Next, at the second level, a store manager operates and ensures that everything in store from the goods to the functioning of the employees is up to the mark. Further, at the third level, there are three different managers for different sections of the store namely- Food Trading manager, Non-food trading manager and Personnel Manager. The Food Trading Manager deals with the things happening in the food section of the store. The Non-food trading manager manages the non-food section such as clothes, electronics and other things. The Personnel manager shoulders the responsibility of managing and engaging the employees working at different sections and levels of the store.

Then, at the fourth level, there are two subordinate managers to the food trading manager namely

Key differences between both are

Lastly, the Personnel manager has also one subordinate namely

This is the complete picture of Tesco’s leadership and organizational structure.

TESCO Management team and TESCO Board of directors

Tesco has a diverse board, wherein eminent leaders work together to run the leading groceries and general merchandise company. It comprises 14 members in total. All these influential people together direct the company on the path of success. They share their perspectives, insights and viewpoints with each other before arriving at a mutual decision. Here is a brief introduction to the Tesco management team and board of directors:

Board Committees of TESCO

The different board committees at Tesco are 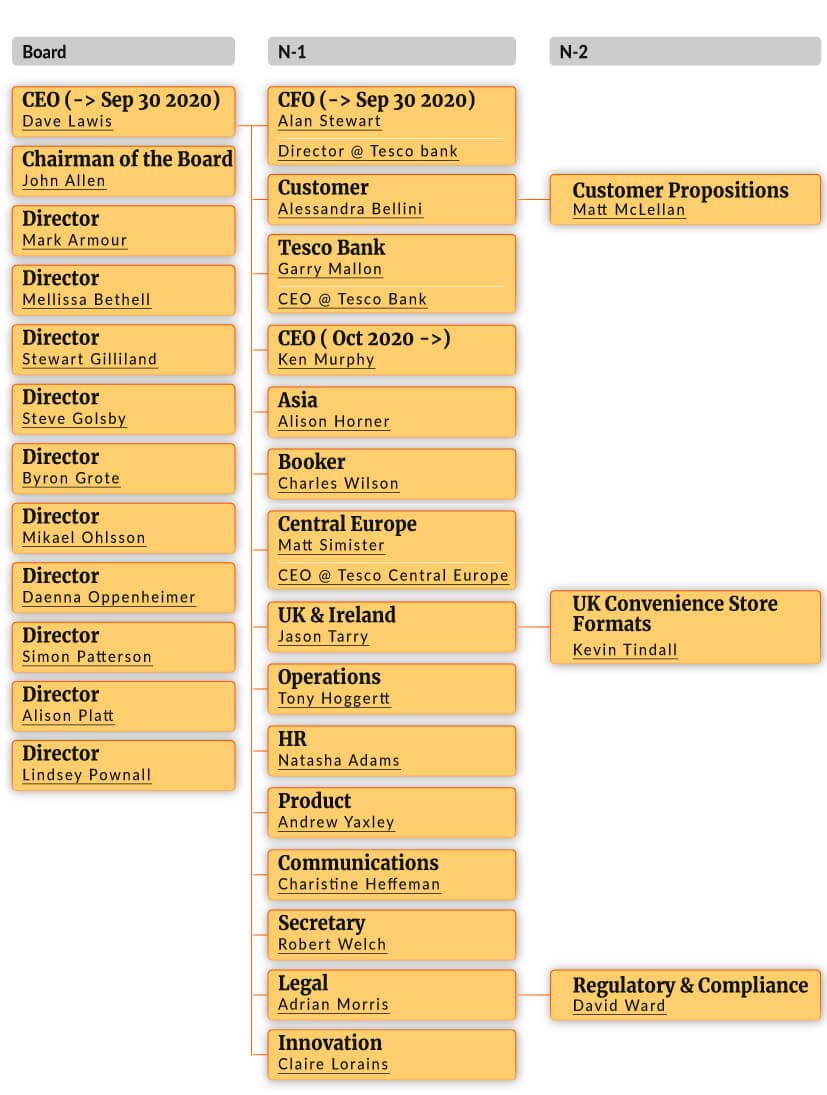 Dave Lewis was born on 12 March,1965 in Yorkshire, England. He has taken educational degrees from Hills Road Sixth Form College, Trent Polytechnic and Harvard Business School. He is an extremely focused and determined person. It was in 1987 that he graduated from Trent Polytechnic and began working at British- Dutch multinational consumer goods company- Unilever. He worked there for 27 years of his career progressing from a graduate trainee to the President of Personal Care at Unilever. He achieved all this with his dedicated efforts and leadership skills. It was further due to his excellent leadership and management style that Unilever climbed much greater heights of success. Then, in September, 2014 Dave Lewis bid adieu to Unilever and joined Tesco as its CEO.

Dave Lewis is the CEO of Tesco. He joined Tesco and acquired this position in September 2014. It is with his extraordinary leadership that Tesco is soaring high in success. He is a calm and patient human being. He believes in digging deeper into the roots of a problem before posing any solution. So, the first thing he did after joining Tesco, was to invite colleagues to write to him about the things they thought their new CEO should think about and work upon. It was through this thoughtful step that he understood the problems which hindered the company’s growth. Then, he utilized his extensive international consumer experience, expertise in change management, business strategy, brand management and customer development to eliminate the problems and made Tesco rise to success.

He is an actual leader, who believes in moving ahead together as a team. So, he listens to his colleagues compassionately and has an empathetic demeanor. Not only this, Dave Lewis also strengthened the company’s relationships with its suppliers with his compassionate and empathetic personality. He inspired Tesco and its suppliers to work together as one company and do their best to become the most efficient supply chain.

Further, Dave Lewis receives a lot of praise for his decision making ability. All through his years at Tesco, he has taken a number of decisions which have benefited the company. For example, one of his decisions which focused on packing Spanish grown vegetables right there on the site rather than in the UK, increased the shelf life of vegetables by 1 day. This increase in self-life of vegetables is extremely for Tesco.

All these qualities and progresses Tesco has made together give a clear picture of Dave’s excellent leadership.

Dave Lewis has a unique leadership style. He is a visionary and an extremely determined person. It is only because of his determination that Tesco fought the hard times and rose back to success. In the year 2016, Tesco’s revenue fell down to the lowest. This struck the company really hard and it seemed nearly impossible to cover the huge loss. But, Dave Lewis was determined to face the challenge and overcome it anyhow. He set tough, clear targets for his company and left no stone unturned to help his team accomplish them. As a result of the tireless efforts made by Dave and his team, soon Tesco’s sales rose up by 9%. This is a clear example of what an excellent leader Dave is

He is not the one, who just provides his team with a list of targets to accomplish. Instead, he is the one who sets the targets and then beacons his team through every step of the way to accomplish the goals. Further, Dave Lewis is like a wave of energy. He conducts every task in such an energetic manner that all his colleagues also start bubbling with immense energy. As a result, his team works with high productivity and great engagement.

Thus, Dave Lewis is a great asset that all members of Tesco cherish to have. He works dedicatedly to enhance the profit of the company and also treats his colleagues with respect, compassion and empathy. To sum up, he is a kind of leader every organization aspires to have.

Ken Murphy will succeed Dave Lewis as the CEO of Tesco around October, 2020. He is an Irish businessman. He earned his educational degrees from University College Cork and Harvard Business School. He is a man of immense caliber and is known as a seasoned and growth oriented business leader. Earlier, he worked at Boots, the leading health and beauty retailer and pharmacy chain in the United Kingdom and other countries of the world. There he worked as the Chief Operating officer and then progressed to Executive Vice President, Chief Commercial Officer and President Global Brands after Walgreens took over Boots in 2014. According to John Allan, the Chairman of Tesco, “Ken’s values align with the values of Tesco. He has strong strategic and operating skills, which make him the right person to become the new CEO of Tesco. 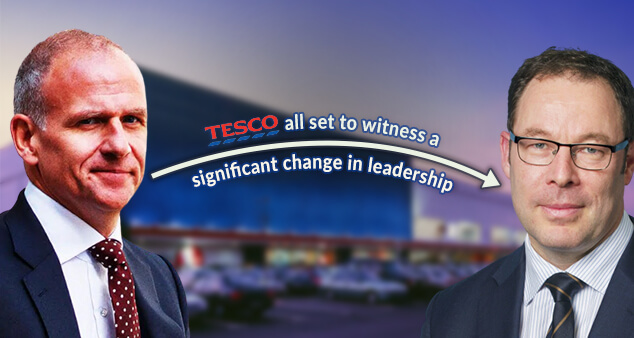 Further, as Ken Murphy takes over Dave Lewis, he’ll have to work on driving Tesco’s sales growth. This is because Tesco is currently financially secure and stable after overcoming the losses encountered by Tesco accounting scandal 2014. Thus, Ken Murphy will now have to take the secure and stabilized company to newer heights of sales growth.

According to the current CEO of Tesco, ‘Dave Lewis’, “for this Ken needs a strategic perspective, Proper understanding of the brand, its customers and extraordinary interpersonal skills to engage 4,50,000 people working at Tesco, which he already has in him.”So, Ken Murphy has to stand by the expectations of everyone counting on him with his caliber.

The company is thus looking forward to welcoming the new leader and working with him. The new changes that he will bring will surely uplift the profits of the company. Also, a new leader is always believed to bring new energy and freshness to the existing system.

What leadership style does Tesco use?

TESCO works on a democratic style of leadership. It is the company, which welcomes the voice of every employee of the organization and includes their views in the process of decision making. It is with the help of motivated employees, the customers further remain happy with TESCOâ€™s services.

What are the five types of leadership?

There are different types of leadership styles, which are practised by the companies of the world. Five of the most common leadership styles include participative, autocratic, Laissez-Faire, transformational and servant.