An insight into the concepts of climate change and Global Warming

HomeEssaysAn insight into the concepts of climate change and Global Warming

Mankind has made dramatic progress in every realm of life with far-sighted vision and the upsides of technological innovations. Today, the modern world is defined by skyscrapers, state-of-the-art infrastructure, bullet trains, space exploration missions, and so on. However, every kind of development comes at a cost, and often it is the environment that ends up paying the costs of human misadventure with nature. Rampant human expansion, ignorance of environmental norms, and over-exploitation of natural resources have incited severe and concerning phenomena like climate change and global warming. With the passage of time and unchecked human activities, the climate of the earth is transforming faster than anticipated and the earth’s average temperature is rising.

As per a special report by the UN Intergovernmental Panel on Climate Change, the most devastating impacts of climate change could become irreversible by 2030. This could potentially mean that more than a million species may become vulnerable to extinction due to the effects of climate change. Climate change and global warming may have initiated a race for humanity against time and given that sustainability is the need of the hour.

Moving Further, The respective climate change has further led to huge transformations in the cycle of the seasons. Though, companies worldwide are doing their bit as part of corporate social responsibility to bring the changes in control.The world's scientists say that the change is huge, and they have named the changing environmental conditions Global warming. In true words, global warming can be defined as

Global warming is defined as the phenomenon of continuous rise in the average temperature of the earth. Earth’s landmass, as well as oceans, are now much warmer than they were a few decades ago. To explain the gravity of the situation, it is alarming to note that as per the National Oceanic and Atmospheric Administration, the average global temperature in 2019 was 0.95 degrees Celsius above the average temperatures recorded in the 20th century. Consequently, the year 2020 was recorded as the second warmest year in 141 years. To add, this rise in global temperature is melting the icebergs and ice caps faster than expected and making the planet prone to natural disasters. Next, to explain the present scenario in a more insightful way, the following section refers to the history and timeline of climate change.

The History of climate change

The History of climate change

As mentioned above, the Earth’s climate is not the same as it was in the older times. It has changed significantly or has rather risen at an alarming rate. The major reason for climate change is Global Warming. Further, the climate of Earth is still changing as Global Warming still continues to happen. There are a number of signs through which we can observe global warming. Given below are some of them:

With the rising temperature of the Earth, glaciers are splitting and melting. This is a huge cause of concern for us as glaciers' melting is further leading to a rise in the sea level.

This is another big sign of climate change. The sea is getting deprived of its ice. This is because the rising temperature of the Earth is making the sea ice melt.

Over the years the weather patterns have become really strange and arbitrary. There is an increase in the number of hurricanes, storms, and tornadoes. The weather has become so unforeseeable that it turns from a calm state to a disastrous one within moments

The increasing temperature of the Earth is making the glaciers and ice caps melt. As they melt, their water flows into the sea, and the sea level rises.

With the rise in the atmospheric levels of carbon dioxide, oceans are also absorbing more of it. As a result, they are becoming more acidic in nature which is damaging aquatic life.

With the rising temperature of the Earth, droughts have become common. This is a huge problem for us, plants, and animals as water is the basic necessity of most living organisms. 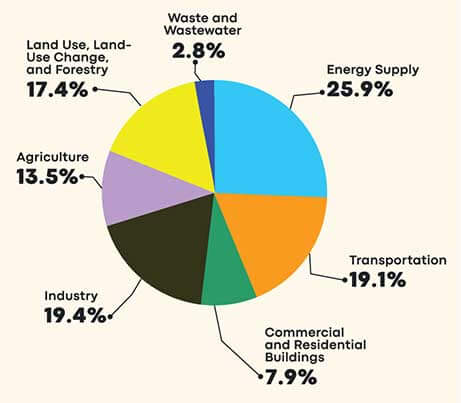 Global warming as we have discussed already is a prime concern for every nation today in this era of globalization. The economies of the world are fighting off with the worry to reduce the global warming effect. Before moving to the ways how we can collectively do away with global warming, let us first understand the causes of Global warming:

Now, let’s discuss some activities which release massive amounts of greenhouse gasses into the atmosphere. 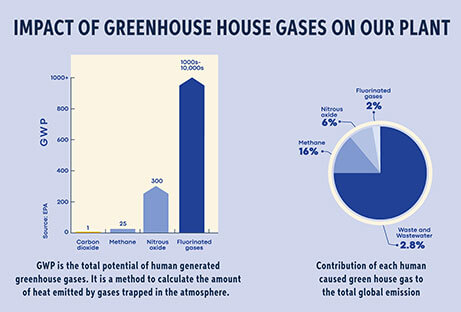 Risk of extinction of different species: Global warming has posed a risk of extinction to different species across the globe. This is because it causes the destruction of their habitat due to factors like unbearable heat, water shortage, and fire outbreaks. Polar Bears, Penguins, American Pika, Reindeers, and Musk Oxen are some examples of species that have become endangered because of global warming.

Droughts and shortage of water: The elevation in the temperature of Earth has exposed many regions of the globe to severe droughts. This has caused a shortage of water, which is making it difficult for us, animals, and plants to survive.

Rising Sea Level: Global warming is making the glaciers, sea ice melt. This is leading to a rise in sea level which is a cause of concern as it causes wetland flooding, erosion, and forced migration of people.

Increase in insect invasions: Insect invasion occurs when a species of insects establish itself outside of its original continent. Further, as global warming has caused climate change, different insect species are shifting from their original habitats to new ones. For example- the western conifer seed bug, which is native to North America, has invaded different countries such as northeastern Italy, Russia, and South America.

What can be done to reduce Global Warming

You as a part of your college assignments get a number of essays on global warming and climate change. Here is a brief sample essay from our side on global warming as an extension to our Assignment help. This would entail the major points that you should cover in your essay assignment. Also, the above-mentioned points can tell how to write an argumentative essay and what points should be included in it.

Humans have always looked upon ways to advance and benefit themselves. Most of the advancements that have been made till date are in order to add more comfort to the lives of mankind. One such discovery humans made in the past was the ability to alter the atmospheric temperature of the globe. It was found in the 18th century that by storing the heat within the atmosphere of the earth, the temperature could be increased. This proved to be great news for the colder nations as they got the opportunity to withstand heat in the atmosphere. This further added more comfort to their lives. However, the people of then were least aware of the future consequences. The dangerous and life-threatening problems that greenhouse gases have created on the global environment are very saddening. This lucrative practice of the past has landed humans in the global warming problem of the present. However, not everyone agrees with this fact. Therefore, this essay is an effort to shed some light on the relationship between climate change and global warming.

Thesis statement: The world today is witnessing major climatic changes that are threatening in nature. There is a dire need to act upon it. Not just the governments of the nation but the citizens individually need to take strong steps to control the heat emissions into the global atmosphere. But, before that people need to realize and accept that global warming is real. It is an aftereffect of our activities that is putting human life in danger. The essay also discusses:

First and foremost the reasons which have brought not sudden but steady changes in the global environment is the ignorance of mankind and its urge to thrive for more. The steep hunger for more improvement and betterment has always ignored the concept of a green and healthy living environment. In fact, according to NASA, due to human activities and increased carbon dioxide trapping in the atmosphere, the temperature of the earth’s surface has increased by 1.62 degrees Fahrenheit. This has happened after the late 19th century owing to the continuous increase in technological and developmental activities. It has also resulted in producing the warmest years on earth since 2014.

Secondly, the industrial revolution and cutting of trees have led to torturous results for the environment of the earth. Oceans of the earth have always been believed to be the coolest and the calmest places to relax. However, in recent times, the temperature of the oceans has been on the rise. It is due to the absorption of the increasing heat of the atmosphere by the oceans, which is caused by global warming. To talk about figures, since 1969, the top 700 meters of the ocean have been warming greater than 0.4 degrees F. Moreover, the acidity of surface water in the oceans has increased by 30% since the industrial revolution, leading to water pollution. This is subsequently affecting the water bodies and their life cycle.

On the contrary, many scientists say the increase in temperature is due to a natural change in the climate. They say that the recordings and the claims of global warming are done on false models, which prove the calculations and foresight visions to be fraudulent. These people refer to the many unknown prospects of nature, which are still hidden from the eyes of humans. These also believe that computer models cannot be believed for conducting futuristic evaluations.

The discussions held through the length of the article withstand the fact there is a dire need to save the planet. The entire climate of the globe is fighting with the uncertainty of extremity. This swinging graph of the climate is posing numerous health challenges to the people of the different sectors of society. Without initiating the blame game, the people should contribute their bit in making the earth and its environment a safer place for themselves and the future generation. Though the governments are working in the direction of improving environmental conditions for humans, the people themselves have to improvise their living standards. The right realization of self-responsibility can help the world relive its dream of a healthy and pure environment.

The world is a beautiful place to live and we as humans can make it even better. Moreover, we owe our life, our existence to this nature, the globe, and the mother earth. Therefore, we should collectively adopt strategies to make the earth a safe and clean place to live for ourselves and the generations to come.