Importance and characteristics of cultural and social behaviour

Home >> Essays >> Importance and characteristics of cultural and social behaviour

The way you sit, behave and exhibit in society, reveals a lot about you and your cultural background. You must be able to recall how as a child you always used to get scolded about your ethical behaviour in school, society and even at home. There have always been fixed norms for behaving, performing and carrying out certain acts at respective places. Moreover, when you exercise these norms or practices for long periods of time, they start representing the culture of a place or a society. Most importantly, you, your friends and peers collectively agree to rules and with time become habitual of the basic system.

These basic practices may include the simple handshake or covering your head in front of elders, or touching their feet when you greet them in the morning. These can vary depending on the particular culture, you fail from. You should remember the cultural values may differ from the religious values, as the culture is generally predominated by the society and the place you sit and deal in. To explain in detail, you can have a culture of touching the feet of your teachers in Indian colleges whereas in the UK or Australia, you pay the same respect by bending down and greeting them for the day.

Thus, culture in simple words can be defined as the behaviour and the social manifestation of emotions and values. It is the righteous execution of the norms set up by the particular organisation or community. It may include the beliefs, values, customs, knowledge, rules and habits in particular. 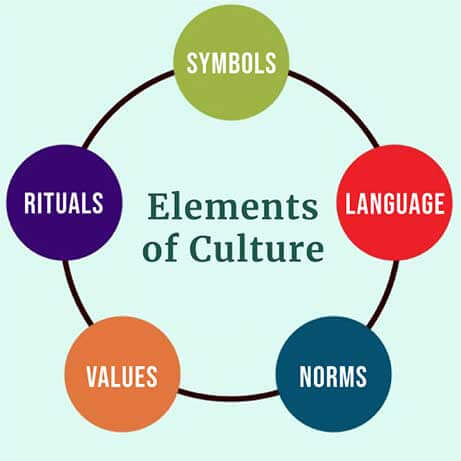 Elements of a culture

How elements collectively shape a culture?

Now, when you are aware of the elements that primarily form a culture. You must be wondering how we can say these elements represent the culture of a particular place in discussion. Here is a brief explanation of the same.

When we talk about culture and society, the basic thing that comes to our mind is the behaviour, way of talking, enactment and traditions possessed by its people. We generally evaluate the culture in accordance with the mentioned parameters. It is when we visit a place, we analyse whether it is influentially good or bad, based on the cultural values exhibited by the individuals we meet. These values include, how we get treated there, the way they greet us and our peers, their rituals, dressing sense, their eating habits, the decorum of the place, along with many other things. These values when put together in a flow and a format, represent the culture of the place or society in concern.

If you consolidate each pearl or elements of the thread in a true, factual and legitimate manner, then the cultural depiction of your values holds positive attention in the eyes of the beholder. It entirely depends on the demonstration of these values and practices in the rightful manner that give the other person the picture perfect to frame in his mind. Further, it is your duty to uphold the values of your culture, so that you are able to illustrate its true form to your audience.

This characteristic of culture emphasizes on an important thing that culture is not something we inherit biologically. Instead, it is something we learn from our parents, peers, and the traditions of the place we live in. For example, in India, young children inherit the value of touching the elders’ feet from their parents and peers. Had they been born at a place, with a different culture, they would have not learned it. Thus, culture is learned. Further, if we migrate from our native place to a foreign country, we slowly learn and adapt to the culture of the new place. This also elucidates that a culture is learned.

Culture is a shared thing. We don't have our individual culture of the self. We share our culture with the people who live with us in the same place. It is on the basis of our shared culture that we understand and behave in a manner which keeps us in good relationships with our fellow beings. If we didn’t have a shared culture, we would not have been able to exist together in a peaceful and harmonious manner. Further, different places have different cultures but it is always shared between the people of the respective places.

3. Culture is based on symbols

Symbols are essential components of a culture. They are used to represent different things related to a culture. Moreover, some symbols even represent an entire culture through them. For example, a cross is a symbol of Christianity. Further, the symbols associated with different cultures can be both similar as well as distinct. But, even if the symbols are similar, they may not necessarily have similar meaning. For example, the Hook ‘Em Horns symbol is used by students to symbolize the University of Texas’ pride. But, in several parts of Europe it is seen as the symbol of Satanism.

Cultures are not completely rigid in nature. They change and evolve with the changing times and under the influence of other cultures which they come in contact with. The basic reason behind the change in cultures is the exchange of ideas and views between them. For example, The Inca Indians were the first ones to cultivate potatoes around 8000 B.C. to 5000 B.C. But, it was later in 1536 that the Spanish conquerors discovered the potatoes and took them to Europe, which transformed their food culture. 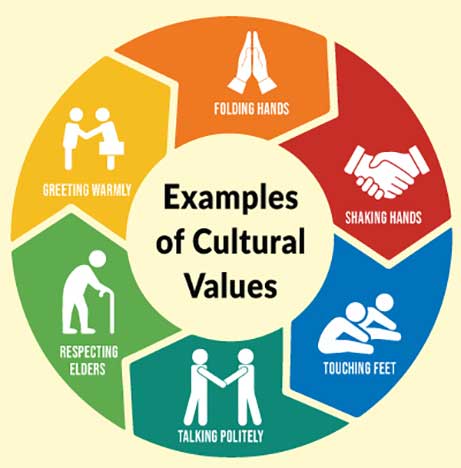 Given below are some examples of the different elements which form the part of the culture of different places:The culture of various places difffer from each other. For instance Gay marriage is accepted as a part of their culture in the US, whereas in many other countries, it is not given the nod of approval.

Why is culture important?

Having a culture is crucial for any society or a community, as it helps to define the norms for the particular set of people. It is regarded as the foundation of a vibrant, harmonious and civilized society. Along with this, it also brings the people together and binds them in a thread of unity. Now, let us have a detailed look at the importance of culture as described below:

Enhances our well-being We share our culture with other people who live along with us in the same place. As a result, we have similar beliefs, perceptions about things and viewpoints. This enables us to live with the people of our society in a harmonious manner and beautiful friendships get cultivated. Thus, we live happily with the people around, without any conflicts, which enhances our emotional and mental well-being.

Safeguards us Culture clearly defines the right and the wrong. It prohibits us from engaging in things which are not good for our loved ones and our community. This way, it restricts people from engaging in unlawful, harming and criminal practices. Thus, culture plays a vital role in safeguarding us from threats.

Contributes in the formation of learned and skilled individuals We start learning our culture right from our childhood days. We listen to cultural stories, learn moral lessons and inculcate our respective values even before we start going to school. For example, in different cultures of the world children are taught to respect the elders right from the beginning. These lessons remain with them throughout their life. Not only this, we also learn different skills from our cultures. For example, if you belong to a farming culture, you’ll somehow learn some farming skills by default. Thus, culture contributes to the formation of learned and skilled individuals.

After having understood the concept, elements, characteristics and importance of culture, here is the brief sample of an essay. This essay is based on the culture and will help you write your college assignment along with the conclusion of the essay. Moreover, we have chosen the topic ‘How culture defines the social behaviour of an individual?’. A detailed essay on this topic will aid you sufficiently in writing your college essay. Moreover, you can learn the tone and style of writing an academic essay through our essay writing service.

Society and culture from ages are believed to have been dependent on each other. The people are said to gain the attributes of behaving and socialisation from their cultural backgrounds only. The differences in the social behaviour of different regions and countries is owing to the cultural variations of the places. However, many contradict the statement and say that the social behaviour is dependent on the place of action. They say, a person acts and responds as per the norms and decorum of the place. This essay is an effort to evaluate the two statements and check which view holds more value.

Thesis statement Behavioural differences are very common to witness. They are the result of the cultural variations that each community, region or the place possesses. This essay evalues the fact that whether cultural values impact the social behaviour of a person. This essay also highlights the points about following discussions.

First of all the language or the actions a person speaks is much influenced by his cultural background. The softness, warmth or even the gestures he uses to express his feelings is highly affected by the culture he belongs to. For example, if a person belongs to Indian culture, he prefers to fold his hands when he greets others or he loves to talk in his regional language. However, in the case of an English person, they like to shake hands or greet with a peck on the cheek. So, it largely depends on his cultural background, the way a person expresses his gratitude in.

Secondally, the acceptance of modern changes is one big factor that is attributed by the cultural values of a person. It is because some communities are set to have a modern approach while some are still following the old practises. Now, the orthodox or broad minded behaviour is largely dictated by the community or the cultural background one belongs to. In the same manner, the acceptance towards swapping of gender roles is not readily accepted in every culture or community. For example in many developing and under developed countries, women are even today not considered equal to men. Same can be witnessed in their social behaviour. In countries like Pakistan and rural areas of India, men are the sole earning member of the family. Women are not even allowed to move out of the home. Also, huge gender disparities have been noticed in Pakistan according to Khyber Pakhtunkhwa, there is a shocking 75% of women in Pakistan who have never attended school in comparison to the 40% of men. Now, this kind of data is sure to reflect on the social behaviour of the people in such communities.

However, contrary to the above two views, the opponents hold the view that social behaviour is largely dedicated to the place, time and situation, a person falls into. For example, in the present times of COVID, when everyone has been locked under the four walls of home. In the homes where men and women both are working, these two are not only earning the bread of the family together, but in most of the modern homes these are the ones who have distributed roles for house chores as well. In such homes, one can commonly see a man cooking for the family or guests while the woman handling the dishes or the vice versa. This proves the fact that one needs to have a very positive and an open minded view to accept the change.

The culture of a society is undoubtedly important and so it is to accept the change. The need today is that we as society should understand both the requirements and work in the direction of reducing the generation and thinking gap, which reflects greatly on our social behaviour.