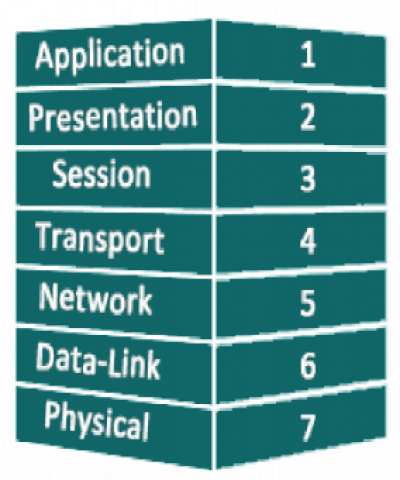 OSI Reference Model, its difference and layers description in detail

Difference and layers description in detail of OSI Reference Model,

OSI Model, stands for Open System Interconnection model. It is a conceptual framework that was developed by International Organization for Standardization so as to give standard conventions for setting up powerful communication among network hubs. In essence, OSI layers provide its users with certain standards with which effective communication can be done between two nodes. The primary purpose served by these layers is interoperability amongst various software products. Fundamentally, an OSI model characterizes a coherent system that portrays the transfer of information packets among network nodes utilizing various layers of convention.

An introduction to OSI Reference Model

The OSI layers are composed of seven abstraction layers where each layer has a specific function to perform. These layers work in hierarchical models in a way that processing output of one layer is served to another for further processing. The OSI layers cooperate so as to transmit information from one network node then onto the next. Also, it is important to note that the OSI model is most often known as Seven Layer Model. Many successful protocols are developed using the approach of the OSI reference model. Also, it is one of the most common models followed to hold inter computer communications. Though OSI model is just a conceptual framework, yet it helps network administrators in troubleshooting various network issues. As, it works by dividing a large and complex problem into smaller chunks and helps in easy identification of the root causes. Thus, in this manner, the abstraction layers of the models help in avoiding certain network issues.

The main agenda of this article is to discuss the ‘Open System Interconnection Model’ also known as OSI model. Basically, this is a conceptual model which is mainly used to scrutinize the flow of data with respect to its seven layers. Further, this model characterizes several computing functions directly into the universal set of rules as well as requirements so as to support interoperability amid software and products. In this article, a detailed information about key features of the OSI model with respect to its protocols is discussed. Along with this, the working of each layer and its protocols is given. Moreover, a comparison between TCP/IP model and OSI model concerning its functions and layers is also detailed in the article.

The Seven Layered Model (i.e. OSI Model) is composed of several capabilities where few of which are mentioned as below:

Let us help you relax a bit!

Being a student in college, you are given a number of assignments. In fact the more number of subjects you have in your course, the more assignments you are ought to get. Situation gets even tougher when you are doing a technical course and the assignments are likewise. Thus, to help you resolve your assignment load, we at Assignmenthelp4me, assist you with our professional writing services. Our online assignment help service enables you to get assignments solved in the respective time and as per the university guidelines.

Each Layer has its own working and process the data in an effective manner. Functions of each layer in the OSI model are describes below.

Relationship among Each Layer of OSI Model

There is a close relation between each layer. Let us understand it with the aid of an example, the below-given table represents two hosts i.e. Host A and host B, which are communicating with each other. When a data communication session is established, the protocol unit is changed among the layers which shows the expansion of data. As shown below, communication amid host A and host B is given along with its protocol data unit.

As OSI is a conceptual model with no implementation, there are some benefits of this model which aids users and organizations to an extensive scale. First of all, this layered architecture is also considered as the standard model in networking as it provides in-depth knowledge about functionality of each layer with respect to its protocols. The below listed are several benefits of this model which helps in implementing a network easily.

Not any more! Place your assignment order right now!

The complexities of technical assignments like OSI Reference model and other such networking assignments often test your patience. In these testing times, you need constant support to aid you in finishing your assignments within the given deadline. More than the deadline, the quality and the instructions are important to be adhered. To solve all your problems, we at Assignmenthelp4me, are available round the clock with the best professional help.

As there are seven layers of OSI model, each layer embraces its own protocol which has different functionalities. Name of the layer, with respect to its name and protocol, are mentioned below in an appropriate manner.

There are two types of models available which can be used for data communication among two or more networks. These models are named as OSI and TCP/IP Model. An acronym used for OSI is ‘open system interconnection’ whereas TCP/IP is entitled as ‘Transmission Control Protocol/Internet Protocol’. Out of both models, only TCP/IP is implemented in real-life networks while OSI is just used for reference. Mainly, OSI conceptual model characterizes as well as standardizes different software and hardware components which are involved in a network communication session. The working of this model depends on 7 layers while TCP/IP works on four layers. There are several similarities among both these models, but implementation of TCP/IP is effective, as the number of layers in this model are less as compared to OSI.

In addition to this, data processing also depends on the number of layers, for instance, the speed of data transmission will be faster in TCP/IP as compared to OSI as data only needs to pass through four layers. Whereas in case of OSI model, the data needs to pass from all seven layers which can affect its performance.

Comparison between models based on layers

The below-given table represents a detailed comparison between both the models with respect to its layers.

In the above-given table, it can be seen that layers of TCP/IP model are less as compared to OSI model. In TCP/IP suite, layers of OSI are amalgamated with application layer which works on protocol HTTP, SMTP, Telnet and even many more are available. Furthermore, the central layer of both models is said to be the transport layer as it mainly works on TCP and UDP protocol which are connection-based and connection-oriented protocols.

Also, network layer of OSI can be determined as an Internet layer in TCP/IP suite as working of both layers are similar to each other. The major protocols which are used in this layer are ARP, ICMP, and IGMP. Moreover, the Data Link layer and physical layer of the OSI model is replaced by network access layer which has the functionality of both protocols.

The main agenda of using TCP/IP model in real-life instead of OSI is because of fewer layers. In each model, data needs to pass through each layer, however, it can severely impact the network performance. In case of TCP/IP suite, data can easily pass through four layers and receiver can receive it in less time period as compared to another model.

Representation of Protocols used by both Models

The below-given table represents different types of protocols which are used by both models in order to transmit data from origin to destination.

The OSI model is mainly brought into use for research purposes rather than its practical implementation. Additionally, all the functionalities of OSI model are superseded by TCP/IP model which can be executed in real-time. Along with this, the number of layers are less in TCP/IP model as compared to OSI model. Moreover, working on TCP/IP is much more efficient than the OSI model. The main reason behind this is because data needs to be transmitted among four layers, whereas in the OSI model, it gets transmitted from seven layers.

What is the osi reference model?

OSI model refers to the Open Systems Interconnection Model. This is actually a conceptualised framework, which is brought into use to illustrate the functionality of a networking system.

What are the 7 layers of the OSI reference model?

What are the benefits of OSI Reference Model?