Understanding Chemistry and its various branches

Chemistry has been believed to be one of the most challenging subjects to understand and grasp, in the school days. Though, in the initial years of schooling and college, you are ought to study chemistry as a burden, but as and when you develop an interest in the subject, you wish to take the course as a part of your higher studies. However, many of you may not like studying chemistry, but there are a number of students who take a deep interest in unwinding the complex chemical formations of the environment and surroundings.

In fact, chemistry is a highly interesting subject as it helps us to intrigue the world of atoms and molecules. Many students across the globe take admission into the chemistry courses and study various branches of chemistry. These further help them to decide the course of their career and ensure their ultimate route to success.

This article will help you understand the broader view of all the branches of chemistry, their uses, and what are the career scopes of the respective branches. Also, it will give you a detailed vision of the career opportunities related to each branch of chemistry.

Chemistry as a study is divided into 5 main branches. The divisions allow you to choose your particular branch of chemistry and study the same in-depth. It also acts as a great source to orient the path of your career in the direction, you aim to move. By choosing the branch, you also allow yourself to gain knowledge in the field of your interest.

Carbon is one of the most widely studied elements in Chemistry. This is because it forms a number of vital compounds with different elements, which hold a great significance in our lives. Organic Chemistry is the branch of Chemistry which deals with the study of Carbon and different compounds it forms with other elements such as hydrogen, halogens, nitrogen and oxygen. Further, ‘Catenation’ is the property by virtue of which Carbon forms an abundance of compounds with these elements. The different compounds which it forms are known as ‘Organic Compounds’. By far, nearly 9 million organic compounds are known to exist. This makes Organic Chemistry a very broad branch in itself.

Where is Organic Chemistry used?

Organic Chemistry holds a great significance in our lives as organic compounds are present everywhere, around us. The most prominent spheres of life, where Organic Chemistry plays an important role, have been mentioned below.

Organic Chemistry plays a significant role in different spheres of life such as the ones discussed above, thus, it offers promising career opportunities to aspiring organic chemists. If you too wish to pursue a career in this field, then you can think upon any of the following career option as an organic chemist

Inorganic Chemistry deals with the study of inorganic compounds, which are formed by the combination of two or more chemical elements. Although majority of the compounds formed by carbon with different elements are termed as ‘Organic Compounds’ and are studied under ‘Organic Chemistry’, but the compounds of carbon which do not contain a Carbon-Hydrogen bond including some carbonates and some cyanides are termed as ‘inorganic’ in nature and are studied under ‘Inorganic Chemistry’. Further, inorganic compounds may be formed by any type of chemical bonding such as covalent bonding, coordinate bonding, electrovalent bonding and metallic bonding.

Where is Inorganic Chemistry used?

‘Inorganic Chemistry’ is an extremely significant branch of Chemistry. It is due to the fact that different inorganic compounds find numerous applications in our daily life as well as in exceptional research works. There are a number of places where inorganic chemistry is used, few of them are mentioned below for your knowledge. 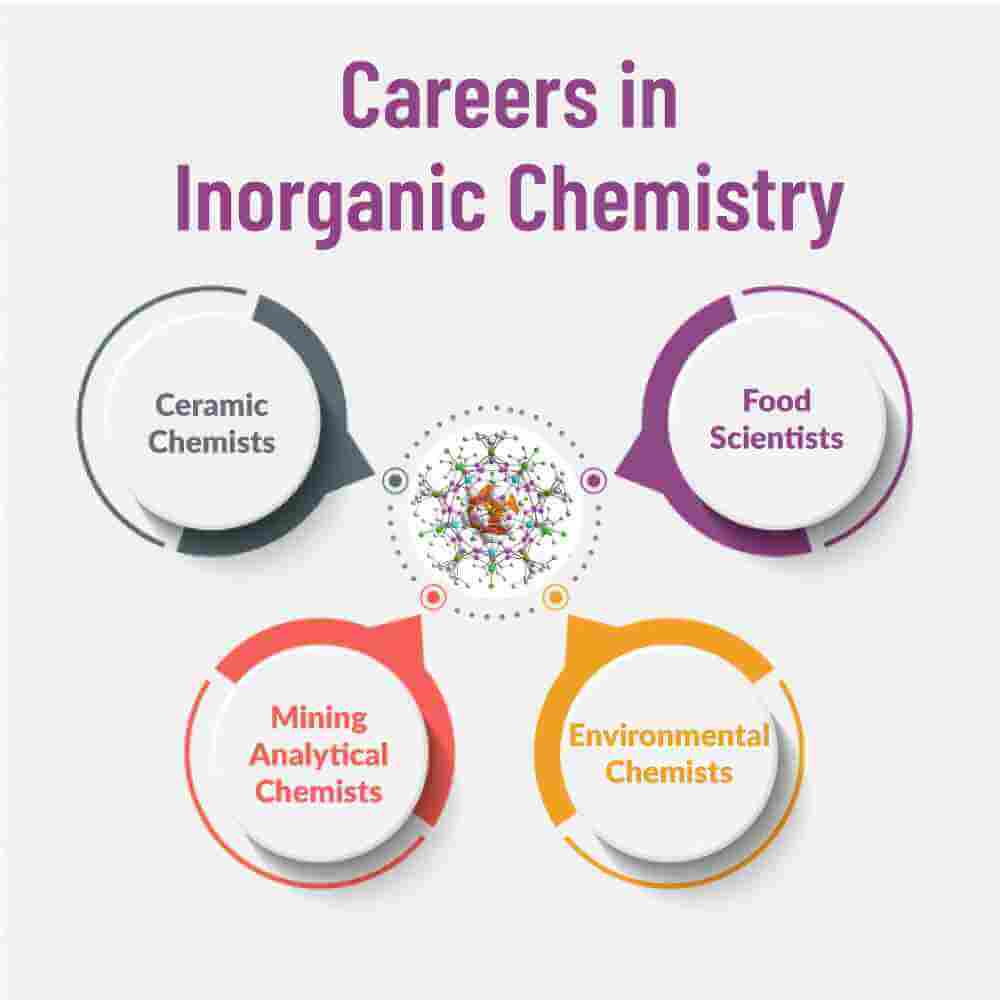 Inorganic Chemistry finds an abundance of applications in the industrial sector, thus, being an inorganic chemist, you get to enjoy a promising career in different professional fields. Below mentioned are some of them.

Analytical Chemistry is the branch of Chemistry which deals with determining the constituents of the collected samples, by conducting quantitative as well as qualitative analysis. In other words, analytical chemistry involves investigating the composition of a sample with the help of different chemical techniques.The quantitative and qualitative analysis conducted is used to ensure the safety of different materials for use in different industries such as the food industry, cosmetic industry and healthcare industry. Thus, Analytical Chemistry is an extremely important branch of Chemistry, which holds a great significance for different industrial applications.

Where is Analytical Chemistry used?

Analytical Chemistry finds a number of applications in different fields, such as the ones mentioned below:

Analytical chemistry as a field has evolved to a great extent and its career opportunities are also expanding with the passage of time. Following is the list of fields, you can look for career options, if you have a degree in analytical chemistry.

Physical Chemistry is the branch of Chemistry which deals with the utilization of various concepts of physics such as thermodynamics, quantum mechanics, time, force and energy for understanding the behavior of matter. It is with the applications of these concepts that you being a physical chemistry aspirant are set forward to analyze matter at both the atomic as well as the molecular level. You are also required to analyze the different types of chemical reactions which take place between atoms and molecules of different substances.

Where is Physical Chemistry used?

Physical Chemistry is an important branch of Chemistry, which finds an abundance of applications in different fields. You can easily analyse its uses, by reading the section below.

After completing your education, it becomes a dire necessity to ensure a secured job for yourself. From the various options available in the job market, you can opt for any of the few mentioned below.

‘Bio’ stands for biological i.e. relating to living organisms, and Chemistry is the study of atoms, molecules, and different chemical reactions which take place between chemical substances. So, from the combination of the above two definitions, ‘Biochemistry’ is the branch of science which deals with the study of the structure and composition of living beings, along with the chemical reactions which take place within them. In simpler terms, you can say that biochemistry deals with everything about living beings from the cells they are composed of to the overall functioning of the different organs of your body.

Where is Biochemistry used?

As discussed above, biochemistry is a wide branch of science that encompasses many important scientific disciplines such as veterinary science, forensic science, and genetics. Thus, a degree in biochemistry opens a number of career pathways for biochemists. Given below are some of them

All the branches of chemistry have over and again proven to be highly resourceful for mankind. From developing medicines to producing technologies, chemistry as a field of study is highly advanced and challenging. It not only intrigues your mind to probe further but also carves a great career path for your future growth.

What are the 5 areas of study in chemistry?

Why are the branches of chemistry important?

Chemistry involves the study of chemical compounds, their structure, applications and everything that is related to them. Further, the different branches of chemistry help chemists club similar chemical compounds together and predict their behavior on the basis of their chemical families. For example, organic Chemistry is all about Carbon and its compounds with different elements. Thus, the different branches of chemistry are really important.

What are the big ideas of chemistry?

There are many big ideas in Chemistry. The Kinetic Theory, types of Chemical Reactions, The mole, Matter and Energy are some examples of the big ideas presented by Chemistry.