Scrutinizing the arguments around capital punishment

HomeEssaysScrutinizing the arguments around capital punishment

The righteousness of the Death penalty's Evaluation

Life certainly does not come by choice, and nor should the choice to end it be an option for humans. Nor the man himself or any law should have the authority to take the life of a man. However, the law of capital punishment goes against natural laws. To define capital punishment is the order given by a country's legal body to award the death penalty to a human being. However, These are done in the rarest of cases when a person's criminal offense is simply beyond the terms of acceptance. To add, Capital punishment is given in a few of the very heinous acts. The categories and the monstrous crimes for which the death penalty can be given are pre-defined in every country's law. In fact, few countries in the world are quite open about giving the death penalty, whereas some condemn this act and do no give it a place in its legal practice.

The Death penalty is the punishment given for most of the horrendous acts by the world's legal institutions. It can be processed by various means such as hanging till death, crucifixion, or beheading. The means generally vary as per the communal practices of a region.;

History of the death penalty

Going back to the Tenth Century A.D in Britain, an act of execution was considered as a common step for putting an end to criminal activities. However, in the next century, William the Conqueror commanded the death penalty only at war times. This did not last for long as, under the rule of Henry VIII, a huge number, i.e., 72000 people, were punished to death. In fact, the modes of execution were also very inhuman, such as boiling, burning, quartering, beheading, or drowning.

In historical times, people were sentenced to death even for stealing or cutting down a tree. The ways of giving the punishment varied from crucifixion to beheading to hanging or even drowning in the water. Later, beginning from the 18th century, laws started to change, and around 200 crimes were taken away from the list of death punishment. In this regard, Britain has been the first country to amend laws and list some definite crimes which should be considered under the level of horrendous acts. After Britain brought a change in its death penalty laws in the 18th century, America and other countries began to change their capital punishment rules too.

Why the death penalty should be abolished

There are a number of firm reasons to abolish the death penalty. Given below are some of them: 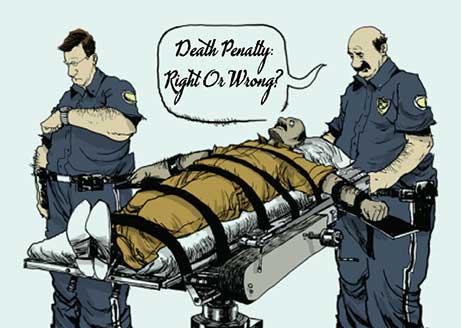 Arguments for the death penalty

The Death penalty, though, is not much appreciated by the laws of the world. Still, there are some types of arguments, which state this practice as rightful. Following is the mention of a few of them:

1. A way to discourage future crimes:

Humans' monstrous acts can not be justified at any cost, including horrendous crimes such as rapes and murders. By executing death punishment for such crimes, different countries' judicial systems try to discourage their occurrence in the future. No doubt, such crimes continue to happen, but the death penalty threat is effective in decreasing their rate of happening.

2. To balance the action and give justice to the sufferer and his family:

By giving the police and judicial system the power to give the death penalty, the government of a country automatically transfers more power into the system's hands. This gives them the reason and the authority to control the public in a more dominating manner. Also, when the legal system of a country is more authoritarian, then the people of the country respect and value the policemen and the legalities all the more.

4. Giving reason to the people to fear from the law of court:

People abide by the law only when they have a fear of receiving a dangerous punishment. Many times, people with a culprit mindset don’t even fear imprisonment. They only fear death. So, the death penalty's existence gives more power to the law and helps the government control the culprit-minded people.

5. To prevent the repetition of the crime:

An odd and negative mind cannot be stopped from repeating the crime if he does not wish to revert. Even after suffering from imprisonment, he will have the tendency to repeat the crime after being released. As a result, leaving the culprits of most violent crimes like murder and rape out in society again can be a huge mistake. So, the judicial systems of different countries utilize the death penalty as a means to prevent the repetition of the crime.

These points help you have a stronger say and even briefs you on how to write an argumentative essay.

College students get a lot of assignments on topics pertaining to the death penalty. For this, they are required to conduct thorough research and evaluate the arguments in favor as well as against. Through this section, Assignment help takes a step forward in helping the students write a productive essay through essay writing service.

Death penalty- An act against the law of nature or a righteous punishment?

Life and death are the two biggest occasions of life. These mark the cause of the beginning and end of human life. It is with sheer blessings of the divine power that a man gets his human life. Also, it is said that a man must involve himself in the greatest of the positive deeds to express his gratitude and admiration towards the almighty. Moreover, when coming to this world is not in humans' hands, how can a human brain plan or order the departure of the human soul from this earth. There are a lot of arguments for the same and the causes of stress on the topic. This essay details the same topic with certain imperative facts and figures and provides an effective essay introduction.

Thesis statement: Ordering the death penalty for a crime is the highest power that the jurisdiction of any country holds. However, it is completely against nature and shuts down any hope for the improvement of the individual in concern. This essay discussed the righteousness of the execution of capital punishment. It also answers the following questions:

Now, the very first point that comes across in concern of capital punishment is that it does not lead to lowering the criminal cases. There has been no certain evidence that states that the death penalty results in reducing criminal cases. In fact, the cases have seen a surge with each passing year. To explain the same, the situation of increasing homicide cases can be taken. Despite imposing the death penalty on crime, 4,64,000 people have reported dying globally from homicide in 2017. This number is certainly higher than 3,85,000, which was noted in 2016. These figures highlight the fact that the cases of homicide have been increasing despite the imposition of the death penalty.

Moreover, giving the death penalty to a human being is an act completely against nature's laws. A human being does not hold any right to act against God's decision and take the life of another human. It is like doing one more crime to subdue the effects of the other. For example, if a person has murdered someone, the very reason behind it needs to be worked upon. Giving him capital punishment is like turning heads from reality and the possibility of betterment. In fact, if some energy and time are invested upon his case, then he can probably be turned into a good human being. He can be sent to a rehabilitation center, where his mind can be revamped to a positive and enthusiastic human being who wants to work for society's good.

On the other hand, the supporters of capital punishment argue that this act gives more power to society's law and order. They say it is with this system that people start respecting the legal system and the country's police. According to them, the stricter the laws are, the better disciplined the country's citizens are. For example, In Dubai and other parts of UAE, the laws are stringent, and they are very much in support of capital punishment. This is the reason that people fear to conduct any crime against women or other criminal acts. The severity of these laws has brought in much discipline to the nations. This can be concluded by the reports produced by Statista Research Department. The reports state that will murder rate in 2018 in Dubai has grown down to 0.1/1000 people compared to 0.3/1000 people in 2013.in fact, the total crime rate of the city has reduced magnificently. It has come down to 33.4/ 1Lac people in 2018 from 58.6 in the year 2013.

Though, many people contradict the views of a polite and reformative world. Still, if steps are taken to abolish the death penalty laws, then the world can look forward to producing even better human beings. There is no need to release the hard-core criminals and leave them in the open. Rather, they should be treated physically and mentally. There is a greater need to amend those evil minds and bring them closer to the nature of God. When they meet the beauty of almighty; then they realize their inner strength and purpose why they have been given this plentiful life. After and when these people have reformed into a totally new being, their selfless souls can be lent to serve society. Darius Clark Monroe robbed a bank at the age of 16. After coming from prison, he documented an Evolution of a Criminal, autobiographical feature film. The film talks about the reasons that pushed him to the robbery, and after 14 years of his release, he even went back to the prison and shared his reincarnation story with the present prisoners there. Thus, every country and every person should hold this view and look at the world with a positive lens and hope of positivity.

Every country's government has the responsibility to provide its citizens a crime-free society driven by law, order, and justice. Needless to say, governments must establish the fear of law among perpetrators to set fine examples. This can be done with stringent punishments that will make potential criminals think twice before committing an unlawful act. However, giving the death penalty is not the solution. It is the enactment of another crime, in fact. Therefore, better laws and reestablishment policies should be introduced in the world's countries to help such sick-minded people come out of the evil circle and adopt the path of peace and betterment.